Slow naming of pictures facilitates memory for their names

Speakers remember their own utterances better than those of their interlocutors, suggesting that language production is beneficial to memory. This may be partly explained by a generation effect. That is, the act of generating a word is known to lead to a memory advantage (Slamecka & Graf, 1978). In earlier work, we showed a generation effect for recognition of images (Zormpa, Brehm, Hoedemaker, & Meyer, 2019). Here, we tested whether the recognition of their names would also benefit from name generation. Testing whether picture naming improves memory for words was our primary aim, as it serves to clarify whether the representations affected by generation are visual or conceptual/lexical. A secondary aim was to assess the influence of processing time on memory. Fifty-one participants named pictures in three conditions - after hearing the picture name (identity condition), backward speech, or an unrelated word. A day later, recognition memory was tested in a yes/no task. Memory in the backward speech and unrelated conditions, which required generation, was superior to memory in the identity condition, which did not require generation. The time taken by participants for naming was a good predictor of memory, such that words that took longer to be retrieved were remembered better. Importantly, that was the case only when generation was required. In the no-generation (identity) condition, processing time was not related to recognition memory performance. This work has shown that generation affects conceptual/lexical representations, making an important contribution to the understanding of the relationship between memory and language. 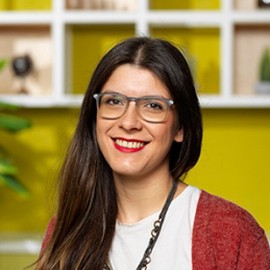 My research interests are in the intersection between language and memory, with an emphasis on language production and communication.